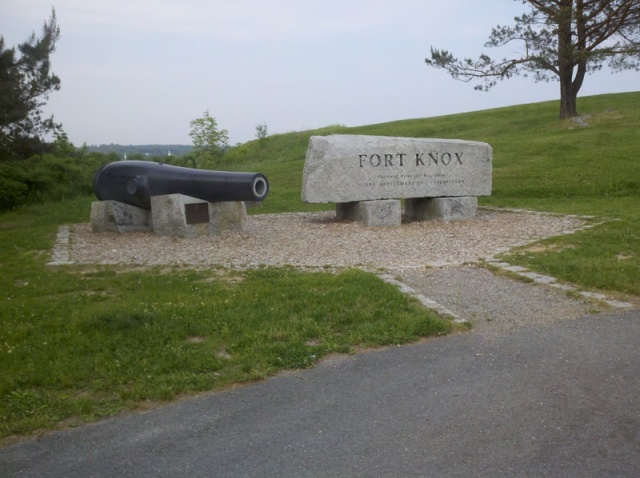 Why is the cannon pointing towards me, the visitor? Local humor?

Fort Knox and the Penobscot Narrow Bridge is about 15 minutes from the campground in Prospect.  Last night Marie and I attended “Business after Hours” sponsored by the Bucksport Chamber of Commerce…what fun…wine, nibbles, happy people and a private tour of the Fort with guide extraordinaire Roger Bennatti. 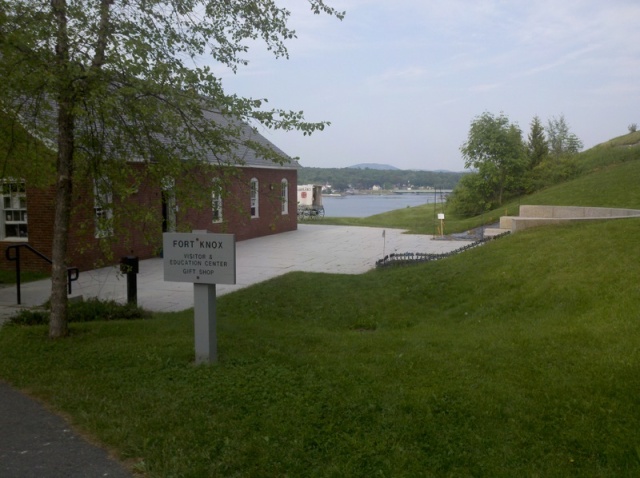 Visitors Center...the newest building at the Fort, built in 1900...originally to hold torpedoes now it's for the exhibits and gift shop

Admittedly, history fascinates me most when it has something to do with cloth, yarn and colorful figures…so a granite Fort that never saw action isn’t my first thought for a great evening…but I was wrong…Roger has enough humor and engineering interest to make the story come alive.

Roger explaining how the river was mined with torpedoes

Interesting Fact:  This isn’t the Fort that holds the gold…but…it is built on a ledge filled with Fool’s gold…weird coincedence, no?

Interesting Fact:  The Fort never saw military action.  It was built to defend the North during the Civil War (based on concern that the British would take the side of the Confederates) but the British never came .

Interesting Fact:  The first deployment of soldiers arrived at Fort Knox in 1863

Cannons from a foundry in Boston...see the wheels and the track?...so the cannon could be aimed

Interesting Fact:  The rapid expansion of the American population during the 1820s and 30s forced the building of new housing. Much of the lumber stock along the east coast was already gone. Builders looked to the vast and nearly untouched lumber resources of Maine particularly within the Penobscot watershed. This led to Bangor’s rapid development as ” The Lumber Capital of the World”, a moniker it would carry into the next century. The Penobscot River played no little part in Bangor’s growing commercial success. The deep unobstructed river afforded lumbermen a natural highway to national and even international markets. Soon wharfs, booms, and mills lined the Penobscot and Kenduskeag Rivers.  http://bangor.mainememory.net/

Interesting Fact: The Penobscot River is the largest river in Maine and the second largest in New England (after the Connecticut River). Its name is believed to be derived from the Native American word penobskeag, meaning “rocky place,” or “river of rocks”, pānnawānbskek, meaning, “It forks on the white rocks,” or penaubsket, meaning, “It flows on rocks”
Interesting Fact: Our Prospect Fort Knox was the first Fort Knox…Named after General Henry Knox of Boston
44.443022 -68.935941