Sitting peacefully in the Bay at 8 AM...a hazy prediction of a sultry day

It’s a sultry day in Searsport…predictions of high eighty’s in the shade…Searsport Shores owners Mr. & Mrs. Tanguay suspect that the recent yarn bomb attack may account for fewer than expected visitors last night.

Mrs. Mary Gelinas of the Mohawk trail was quoted as saying that she and her husband love the thrill of danger and decided to extend their stay at the campground a couple more nights in hopes of catching a glimpse of the bomber during the night…they were alone on the front row. 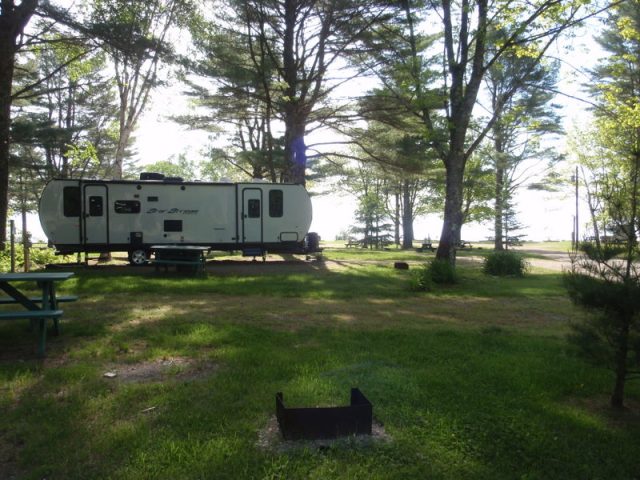 Vynal and Babbette have joined us for a full season of camping...

Although no official accusations have been made, there is strong suspicion that a certain Karen Jelenfy of Washington Maine is responsible for the fibery attack. Neighbors have cast the eye of doubt upon this attractive, artistic woman noting that she spends a great deal of her time among used books, goats and children…quietly working out ways to change the world.  Owner Astrig Tanguay is still hesitant to condemn or condone this behaviour, noting that neither the Searsport Shores Blog nor the Fiber College blog are listed on Ms. Jelenfy’s favorite blog list.

A pink celebration on the way to the beach

More updates to follow as information is confirmed.  In other news, the Rhodos are bursting 3 full weeks ahead of schedule on the path down the beach and the natural dyeing obsession has struck hard, possibly due to excessive pollen counts.  Last night, a dye bath was made of the weeds from the garden…primarily soapwort and wild Canterbury bells…yielding a mediocre yellow dye with an alum mordant.

Soft greens & yellows from weeds pulled in the garden

For those interested in this sort of thing, please comment and links will be forwarded to you promptly.

Thank you for your concerns.

A day of gardening, dinners in the crockpot and there’s time for a 4 o’clock weaving break…it’s a very good day 😌☺️🐌🪲🧚🏽‍♀️
10 days ago we were in NYC for a swirl of Urban energy…so much fun to go, such a relief to come home!
In April flowers are more precious!
No filter needed…just blue skies and high winds…kite flying weather
Spring peepers are lulling us to sleep and dandelions will star in tonight’s dinner #lovespring #eatlocal
My guy is rockin’ a new look 🥰 @campmaine