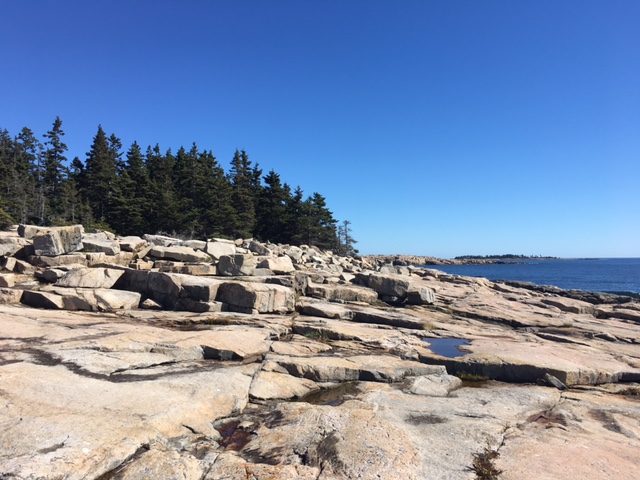 My good friend Rick has a convertible and a few days ago the weather was outstanding, so he and I went on a road trip to the Schoodic Peninsula, part of Acadia National Park that’s on the mainland a little more than an hour from Searsport. Some of the wave swells came crashing in on the granite point, raising spectacular splashes that went high in the air. Of course, I wasn’t able to capture any of that action, so I had to settle for this nice shot.

From Schoodic we traveled to Bar Harbor, where there were two large cruise ships in port that day! It was quite a surprise to see the two ships, each with their tenders ferrying passengers to and from the wharf in downtown Bar Harbor. As we walked around downtown looking for a place to have lunch, we heard many languages being spoken. And as you might imagine, most of the restaurants were quite full. We ended up at Leary’s Landing Irish Pub, where I had fish & chips and Rick enjoyed his shepherd’s pie. They have a great selection of brews and a full bar.

In all, a great day on the road!

When you’re desperate for green shoots a few dried rose hips are worth the effort! Bubbles, our youngest angora goat just turned 1 this week 🎂#mymainelife
So this afternoon Steve grabs his gloves and tells me he’s headed down to the shore to do a little work. After about an hour when I couldn’t hear a tractor or a chainsaw, I walked down to see what was up. #hardatwork #itsmarchinmaine🤣😂🤣
#searsisland is 950 uninhabited, vehicular free heaven...just 5 minutes from the campground 💕 there’s a wide, paved boulevard to walk down the spine of the island and miles of beach to explore along the perimeter. #mybackyard
We’re blanketed in snow but thinking about Spring. Could be the flower seed packets piling up on the kitchen counter or the cardinals in the willow tree...but we’re thinking about May and our tradition of free camping on opening weekend. Join us! #visitmaine #campmaine #mainecamping
Can you think of a more relaxing moment? Stacking periwinkles on the beach on a warm winter’s morning. #mybackyard
Who’s our favorite candidate? #localpolitics #searsportmaine
MakersGuild founders Astrig and Steve are standing in Augusta today with Senator Erin Herbig and Maine Director of Tourism Steve Lyons. #proudforthesupport! #flaxapaloozamaine200 #maine200 #visitmaine
Bubbles was the only one who wanted to walk down and see the ice by the bay today...so pretty but omg it’s cold tonight! #visitmaine #mainewinter