What a weekend…or who says we don’t know how to party? 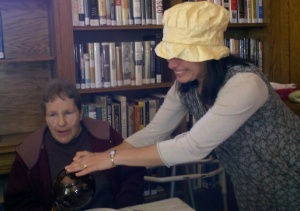 Tea for Two on May Day

When you really need a day off, you can feel it in your bones…and loved ones can hear it in your voice (and I’m going to leave it at that).

So this weekend I took Saturday off… 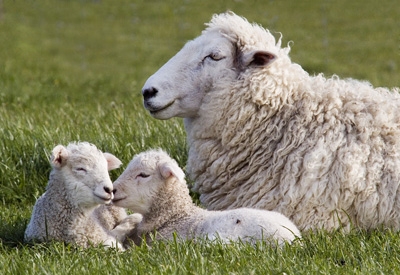 It's that time of year!

First I headed to Fairfield in the Kennebec Valley for the Maine Annual Spinner’s meeting…a day of gabbing, spinning and fleece gathering.

These fleeces are long, shiny and will be part of the natural dyeing demonstration during the June Garden Day Tour.  We’ll probably sell some of the washed and dyed locks (dyed with daffodils, seaweed and lichens blown down over the winter) and then spin the rest for a rug weaving project later in the fall.

The drive over the mountains towards Waterville was beautiful.  The sun was shining, the leaves aren’t yet out on the trees but the maples are in full bloom and the pastures are green, dotted with an occasional brave dandelion.   Steven had loaded my i-pod with rolling tunes from the maritime and on the way home I stopped at a local farm for a pound of homemade butter (shortbread cookies in our future, my friends).

When I got home there were two early birthday presents waiting…things were getting better and better!  Steven and Norma found three different types of currant bushes that I had asked for last year…they’re supposed to produce the best fruit for wine and I think I can use the left over fruit pulp to dye some wool…waste not want not.

They chose to plant them in a sunny spot around the honey bee pond;  Maybe they’ll even bloom this year…my fingers are crossed.

Everybody wants to be the center of attention

And that was only the first surprise.  While I was away, Mike and Steve built a goat stand so that I don’t need to chase our beasts around while I’m trying to harvest their wool…no more bending and complaining for me!

The center of attention

And there was more.

Amore’s in Belfast was having a cabaret night…and we had reservations.  Dinner at 8?  Can I tell you the last time I had dinner at 8…in heels?  We had chicken piccante and so much fun!

And the pleasures over-flowed into Sunday…

So I spun, hung out with goats, stared at cross dressers and sipped tea from a porcelain cup…what did you do this weekend?

2 Comments on “What a weekend…or who says we don’t know how to party?”

Purple carrots are beautiful but their color was fleeting on our mordanted fabric…oh well, into the tansy pot they’ll go! The Ewe to You retreat in two weeks will have a garden dye session…perhaps the women of @wrinkleinthymefarm will have a trick to share🤞🏼
Good morning!
My favorite season is the one that lets me “shop” for every meal in the garden!
This weekend was all about carving spoons…who would have thought that combing a knife and a stick of wood with mindfulness could be so satisfying?!?
We’re getting a new and improved pizza oven at the art studio!💃🏽💃🏽💃🏽 #luckyme
Young entrepreneurs in my world last night…drawing for $$💕