The maple tree above site 90

These days are filled with canning tomatoes, making more applesauce, trying new pickle recipes and dyeing wool as fast as I can…the nip in the air is enough of a reminder that we’ll be inside more hours than not before long.  Already is too chilly (for me, not Steve) to work outside before 10 and if we’re not careful it’s dark before we’ve finished putting away the tools from the day.  For two nights now we haven’t had any guests driving in so I imagine that we’ll shut everything down by next Monday…the camping season is trickling down to a full stop.

Like a lot of people, we’re swimming through a bumper crop of tomatoes this fall.  Steve planted 6 heirloom varieties, and my current favorite is the Green Zebra.  It’s a striped tomato that’s green with a golden blush when it’s fully ripe.  The first few times we had them on the dinner table, no one was very impressed…but then we found out how they shine…when you cook them on the stove top, the skins melt away and the resulting vinegary  puree is a heavenly base for soups and sauces.

When Susy the weaver was here we used them as a base for a Thai influenced soup…with basil, tofu and chili peppers.  A couple of days later they became the focus of a spaghetti sauce with roasted onions and mussels Steve harvested from Sears Island…and yesterday they starred in dinner and dessert.  I found this green tomato cake recipe on the internet and made the moistest cake….but the instructions of the recipe were to grate the tomatoes, drain and throw away the juice…if you saw what a pretty green juice resulted you’d have been reluctant to throw it away too…so I used it as the broth in our risotto…added a handful of grated tomatoes at the end and a bigger handful of grated Parmesan cheese…it was the perfect base to the sea scallops we got from Wyman’s in Stockton Springs…check out this tip nut post for really good ideas if you’ve got love apples by the basket too. 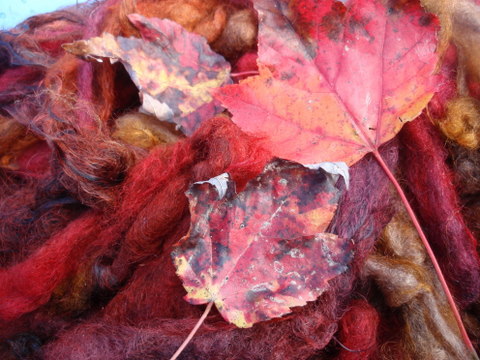 Inspired by the Maples

And then there’s the wooly side of my life…the first carpet bag should be cut off the loom today…I’ve been delayed because all the fall foliage sends me into a dervish for dyeing anything I can get my hands on.  Yesterday I gathered maple leaves from the ground and set a goal…could I dye wool that matched the colors for next year’s “perfect” tunic…So remembering someone telling me that naturally gray wool dyes richer and warmer colors than white wool…I set out with a fleece raised by Lee Straw on Metnic Island…Look what I got…