I’ve said it countless times before but the best part of owning and running a campground is the guests who visit. The second best part is all the tasks that fall under the “must get done” category. Today I’m sitting at the computer bleary eyed…so I’m writing this post to justify the nap that’s written on my “to-do” list for this afternoon.

Last week we juried the classes for Fiber College…it’s held here on the campground the weekend after Labor Day…57 wonderful classes on everything from wood carving to knitting to spinning to quilting…we sorted through more than 90 classes to choose the best. Once the decisions were made, the instructors were notified and now we’re on to step two: getting the website completed and spreading the word.

With the magnificent Spring weather we had, we were able to get a jump start on the billboard. We rented a boom lift from Rockland so that Steven and his crew could replace all the under-structure of the sign. Did you know that Searsport Shores has the largest billboard on Route 1 from Calais Maine to Miami Florida?  Just a fun fact for your next cocktail party.

Monday morning I was up at 4:30 AM so that I could return the boom lift and continue down to Boston for the Wholesale Gift Show at the Convention Center near South Station. I went with my sister Chris (Watertown Watch and Clock Company) and bought nightlights, bells, toffee, ornaments and puppets for the store.

When I first started going to the show 17 years ago, the entire experience was overwhelming because there was so much to buy and I was too young to have confidence in my choices. Fast forward to today and I walk the booths thinking of the guests I have on the reservation book…I know that Anna needs gifts for the “girls” in the office, Tamara will buy only things made under fair trade rules for all the cousins in her family, Bea will buy anything new with a lighthouse…I want the bells from the goats…well, you get the point.

Christine and I met up at 10 AM and shopped until they closed the show at 6 PM…I’m not much of shopper so this was some seriously “deep digging”…followed by Thai take-out and a goblet of wine.

Tuesday was about playing with the nephews and shopping all the big box stores for supplies that are hard to find in Searsport…TJ Maxx was the stop for some much needed jeans, but they also had sand painting kits in the kid’s section…it was the most fun $5 has bought in years…if you see them, buy one or two because there will be someone in your world that will be very happy because you did…

We had so much fun we couldn't stand still for a picture!

Wednesday morning was about picking out paint for the billboard and shopping the outlets for me…and before I knew it Steven had dinner on the table and we were pulling into the driveway…sister-in-law Shari came along for the ride and is here to play for a few days…more of her pictures later…but for now, I’m going upstairs for a nap. 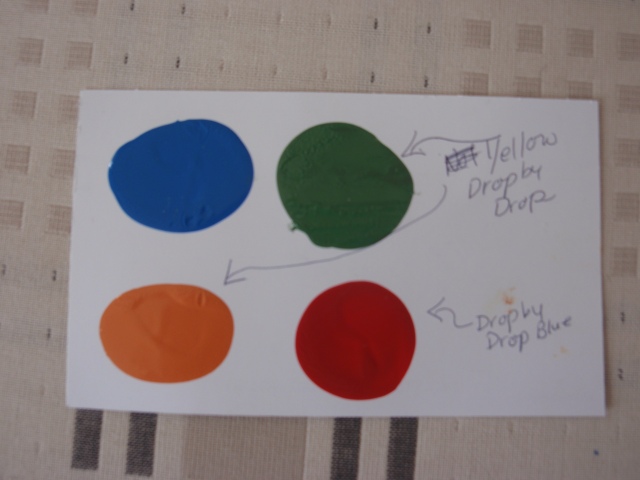 The basic colors for the new billboard...thanks to Beth at the paint store