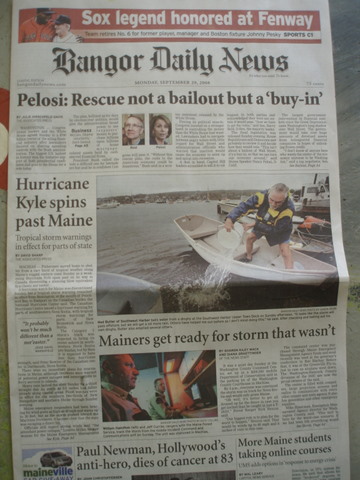 We had battened down the hatches, picked so many flowers from the garden that it looked like a funeral parlor in the office and stowed many of the toys of summer in the shed …and we had no dramatic weather.

Now this disappoints me because I love the drama of a good storm but Steven is thrilled because there were no trees or limbs to clean up.  Kyle missed us completely, offering us only rain from Friday afternoon until late last night.

On the upside, because I was afraid that the wind and rain would ruin the cherry tomatoes, I decided to make jam with them on Friday morning…something I probably would have put off if Kyle weren’t breathing down my neck.

I took the simple recipe from a favorite French blog Chocolate and Zucchini that calls for only tomatoes, sugar and cinnamon sticks…the results were wonderful.  If you have extra cherry tomatoes, don’t hesitate to make a batch of your own, first because the taste is delightful, second because the jars look so pretty sitting on the shelf that you can’t help but smile.  I used 4 Kilos of Sungold Cherry tomatoes and ended up with 8 pint size jars.  From start to finish I invested about 3 hours of work including picking and washing the tomatoes and cleaning up the sticky drips…and I had the satisfaction of not letting perfectly good fruit go to waste.  In a perfect situation, this jam likes to be stored on a dark shelf for a couple of months in order for the flavors to develop but I used the little bit that didn’t fit in the jars on my morning’s toast and I’m very pleased…the flavor is distinctive but if I were to close my eyes and simply guess at the fruit, I would have thought this was a compote of golden raisins…if you try the recipe, tell me if you don’t agree. 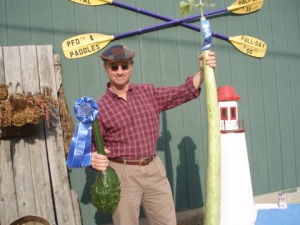 In closing I want to share this fun photo of Steven…he won the judge’s award at the Common Ground fair for his dinasaur gourd…the other gourd is one of several “walking sticks” he grew over the summer.  We’ll be saving the seeds from the best gourds so if you’d like a couple to grow in your garden, drop me a note and we’ll send you some seeds for your very own!

I’m off to pick more apples for apple sauce and try to get some spinning in this afternoon…the sun’s out and things are drying up nicely.