Tuesday afternoon noted author and naturalist Tom Seymour led a nature walk on Sears Island at the special request of one our campers, Amber, a middle school student who someday would like to study the ecology of the Amazon Rain Forest. 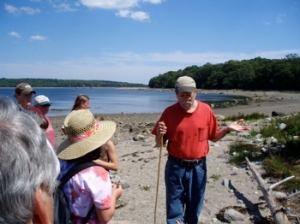 A group of about 20 set off from the causeway beach then into the woods traversing the island. We stop every so often and Tom points out the many plants which can be used as medicines and teas including sassafras, valerian, Saint John’s wort, and bunchberry. One highlight is about a hundred year old bayberry bush. Tom tells us they don’t grow very much and he’s been coming out and seeing the same bushes looking about the same for decades. He really is a wealth of knowledge about Maine’s natural habitat. This bush has grown and is quite big hence its age. Along the way Julie and I are gathering and eating wild raspberries, strawberries and blueberries. We come across the largest anthill I’ve ever seen—it must have been more than a foot tall.

The island at one time had a small inn and a farmhouse but now is uninhabited and the foundations of some of these buildings remain but are hard to find and hidden from view without Tom to point them out. About an hour into the walk, after a short talk about preparing ant eating cat o’-nine-tails (like corn on the cob) we see a very rare indigo snake on the side of the road which looks like has been recently killed. 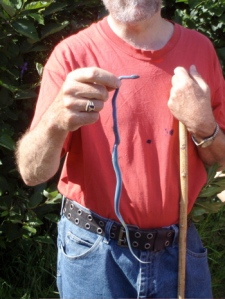 View at the end of the woods

I find a good walking stick to use. It takes about another hour to get back but it seems like everyone has learned a lot and had a good time along the way; another great Maine afternoon experience.

The next day, encouraged by Tom thinking the blue snake we had seen during the nature walk was very rare or possibly endangered, Julie and I head back over to Sears Island to find it for further examination. We pump up the tires on a couple of bikes, load them in the truck and we’re off. From the causeway we head up the hill—it’s about _ mile until we hit the trail we were on yesterday. It’s hot today and I’m glad we using mountain bikes to get there. We come to about where we think it is –just after the cat – o’ nine tails and get off the bikes to look. I can’t find it but know it’s near grass that was cut in a sunny spot. We’re just about at the same space at the same time of day. Luckily, Julie knows where it is as she put the snake along the side of the road after Tom picked it up to show everyone. I am skeptical that we can find this snake – it’s not that big, perhaps a bit longer than a foot of so – in the woods but am out here trying. It takes about a half hour or so of searching and Julie locates it way past where I thought it should have been, about 30 yards from the cell tower near the end of the island. I’m amazed that no other animal came during the night or day to eat it. I guess animals don’t like blue food either. 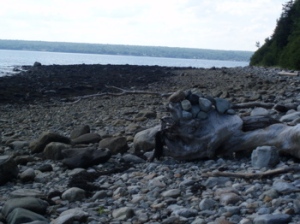 We pack in a ziplock bag and place next to an ice-pack in my bike bag. We mark the location on the trail with stones and head back to Searsport Shores. It really is a nice island to bike plus we saved a whole lot of time on 2 wheels. We take some more photos, it looks like some ants have gotten to it and it’s a whole lot stiffer than the day before but the indigo color is all still there.

Tom comes the next morning to pick up the snake to take to a reptile expert for further evaluation. Stay tuned for more news in this space.

28 years ago @stanghair gave me batik napkins and we used them forever. this weekend one was elevated to art. #reuserevolution
Our tale of seven mallard ducklings born on the rec hall porch this week.
A moose in my backyard! Again 🌻💕🐝
Peace and salty seaweed in my world...wishing everyone the same peace.
Early morning stitching at the beach...Binx is hoping for coffee cake #novembermorninginmaine
I finally got all of our woolens into the fresh air...now winter may begin...ever grateful for this November pause!