I’ve been thinking some about the 4th of July plus I’ve had the opportunity to visit the Searsport Shores camping crew. I hope you enjoy reading my guest posting.

From Boston the bus ride is an easy trip. The coach is new and comfortable and they show movies on board. First up is a very good documentary about the earth called “The 11th Hour” and then “Field of Dreams” as the bus moves from Portland up the Maine coast. I’m beginning to feel very American. The scenery is spectacular and I spend more time looking out the window than watching the movie. People move on and off the bus as it passes through places I’ve always meant to visit: Brunswick, Waldoboro, Damariscotta, Camden, Lincolnville, Belfast and then finally arriving at Searsport. The air smells crisp and clean and its good to be here.

The campground looks great. Everything green with plantings everywhere. There’ve been many upgrades since my last visit some years ago and by now there is really something for everyone; quiet places to read and relax, a shoreline to explore, a playground and video arcade for kids. Astrig and family really have no time for marketing in this high season and there is a huge gap between how beautiful the campground is and what tiny internet photos can show. So among my other duties, I take some of the photos you see here…there’s really too much to show but these were my favorites.

Everyone enjoys an ice cream sundae party on the 3rd of July among with a dance party with lights featuring a limbo contest. The excellent locally-made Maine ice cream with hot fudge is a nice complement while mingling among campers. Some have been coming for years, some just arrived but everyone is very friendly. 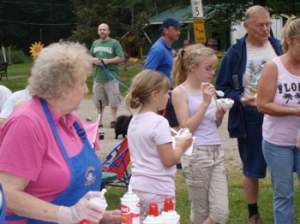 Who screams for ice cream?

The 4th of July is a gem of a day, sunny, mid-70s and we decorate a float for the Searsport parade along with a killer sound system and a bubble machine. We roll with about 30 camper kids, most with painted faces, some with bikes done up in red, white and blue, first through the campground and then into the parade. 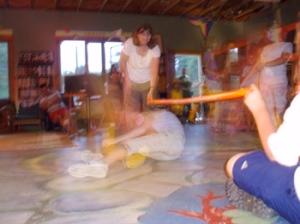 Everyone do the limbo dance!

The float looks great; just before heading onto Main Street a veteran hands me a flag which I wave throughout the route. At one point we stop and Bob, who has been manning the bubble machine while shooting T shirts from an air gun into the crowd, announces that its time for the chicken dance. The kids spill out the flatbed float and dance to the crowd’s delight. After the parade we go the Searsport Fire Department’s Muster featuring water games with water hoses, bucket games, and lots of water balloons. No kid stays dry. Bob gets caught up in the action and douses some adults as well. Everyone laughs a lot and has a real good time. 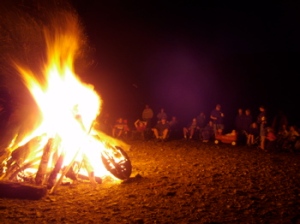 Later at dusk on the beach Steven and his crew have prepared a huge bonfire. It lights quickly and in a few moments it turns into a towering inferno which you can’t get too close to. From the beach its possible to see the Searsport fireworks. Maine’s coastal geography also allows fireworks in Belfast, Castine and Blue Hills to be seen in the distance all about the same time. In a couple of hours the tide puts out the fire. Throw in a grilled dinner and 6-4 Red Sox win over the New York Yankees and its about a perfect as a 4th of July can get.

I hope you enjoyed reading and will post again later on.

One Comment on “Ken’s Guest Posting … Impressions of July 4th”