(Dear reader, in case you hadn’t heard, Steven and I have left our home on Penobscot Bay for a camping trip of our own. If you’re not interested, page down a few posts and everything will be devoted to Life in Searsport; in the meantime, we’ll be traveling for a while and wanted to keep Bob and our friends updated on our travels.)

O.K.  Hands Down paddling the Silver River has been a major highlight of our trip…hands down.

Everything came together perfectly…it was a beautiful, sunny, 80 degree day, we were among tiny handful of people on the river and all the birds and animals were waiting at the side of the water for us to paddle by.

Steve paddles more than I do...

The Silver River State Park is a 5,000 acre park that encompasses all but the headsprings of the Silver River (famous for the adjoining glass bottom boat attraction that began drawing in tourists in the 1870’s).   The area has a complex history that began at least 12,000 years ago with the Paleo-Indians and included the Seminoles later on.  Its always been a rich agricultural area with traces of vegetables, tobacco and oranges since pre history. 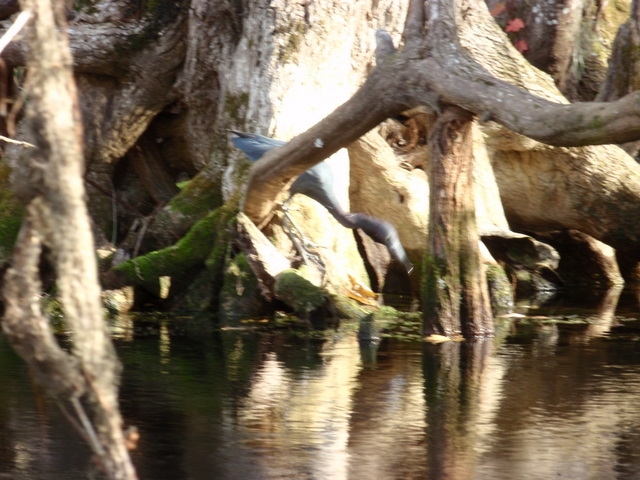 With the invention of the paddlewheel, Silver River and the source springs became a major distribution centeral for Central Florida when the plantations were installed.

The location is known to most Americans because was used in 6 Tarzan movies, The Creature from the Black Lagoon and The Popular TV Series, Sea Hunt.

Listen for the screeching...

But we only learned this later by reading the brochure…instead we drove into the park, signed up for a canoe ($5/hour) and hustled to the river’s edge.  Obviously we saw only a tiny portion but the first 5 minutes simply blew us away.  With very little direction from the rangers, we put the canoe in the crystal clear water and paddled up stream for the proposed three hour excursion.  As we rounded the first bend there were alligators on fallen tree trunks, lines of turtles conferencing on any exposed rock, birds of all sizes flying in, fishing under the lilly pads and monkeys playing in the trees.

Really, just think of all your senses being engaged in a wild, Floridian river…we were alone with the jungle.  The water was deep and clearer than crystal, the huge blue herons were gracefully flying the line of the river, the fish were hanging at the bottom or leaping across the surface ripples in all shapes and sizes, the sun was warm, the sky was an uninterrupted blue, the monkeys were screeching and leaping from tree to tree…it felt like we were on a movie set because everything was as flawless heaven itself.

Too tired to eat

Did Tarzan swing from this one?

I’m scattering a few of the photos here and like the hidden treasure that this park seems to be, there is little on the Internet about it…so you’ll simply need to visit yourself…as soon as the fates offer the opportunity.

2 Comments on “Silver Springs…The best ever!”