A Day in the Life…

It’s been a busy week here at the Shores…and never a dull moment trying to organize for our opening weekend next month and the necessary web work for Fiber College.

Generally speaking it’s muddy and cool on the Maine coast. The tree buds haven’t begun to swell in earnest but the Pussywillows are at their peak and the first of the crocuses began blooming down at the beach this week.

We’re cautiously uncovering the gardens and trying to rake the areas that will soon be covered with ferns…come to think of it, we’re already racing against time…oh my!

The daffodils leaves are about 2 inches high.  Last year we planted another 250 bulbs in the front field that you see from Route one so I’m anxious to see if the majority survived the winter. Some day I want the entrance of the campground to look like the cover of a Spring gardening catalog…we all need our little dreams!

All of the snow cover we had during this year has virtually guaranteed a good return of our zone 4 perennials so I anticipate a wonderful summer of flower gardens and plenty of fruit on the trees. 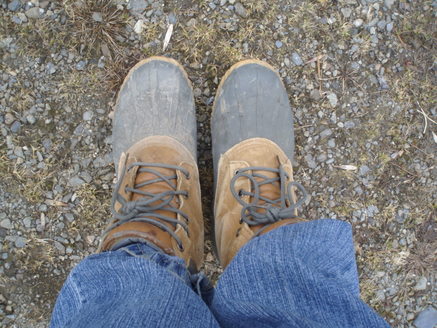 High fashion of the season

But for now it’s mud season and you can’t walk anywhere without Bean boots or wet feet.  The beach is soft as the frost melts away and we have all of the roads into the campground blocked off because the tires make such deep ruts in the soft gravel.

We’re not without hope though.  There’s no doubt that things will warm up soon because by 6:00AM you can hear a wide variety of bird songs and every afternoon the blue heron is fishing at the water’s edge…he seems to be competing with the young loons that stay close to shore in April. Yesterday the crows alerted us to a bald eagle sitting in the oak just above the beach on site #4 so maybe she’s already feeding her young?

Of course, to keep things interesting, there are snow showers predicted all day today and throughout the up coming week

So I decided that it’s too cold for me to work outside…therefore, I have a pressing need to blog for you and catch up on paperwork that’s piled at my desk.  To assuage my guilt, I have a big pot of turkey lentil soup simmering on the stove for Steven when he finally comes in smelling of chainsaw gas and pine needles.

Today he’s working on the trees and prepping the raspberry patch with a couple of other guys…trimming branches, cleaning up the winter storm prunings and channeling the Spring water run-off in hopes of stopping some of the problematic erosion.

When he finishes this afternoon we’ll snuggle in for a good movie and I made a chocolate cake to go with the last of our ’08 strawberries…let it snow another day!

In contrast to today’s gray skies, yesterday we had warm sunshine and no breezes (a welcome combination)…and helpful friends hanging out for the day…so with Sister-in-Law Su’s able assistance and friend Kristie from Colorado’s unilateral patience, we got Queen Lollipop sheared for the summer.   She looked so dirty when we started but underneath she was brilliantly white and so very soft.  She’s an Angora goat so her locks had grown about six inches since last fall and she was badly in need of a hair cut.

There is no way I could have done this without Su and Kristie.  Kristie entertained The Queen with scraps of sweet potato while Su and I trimmed away with scissors, trying for the longest possible locks all the while keeping the points of the scissors away from tender skin…hers and ours. (I can hardly wait to wash and dye her wool while I think of a new project that I won’t have time for until next October…but the dreaming is the biggest part of the fun anyway.)

The good news:  it only took us three hours and a few strained muscles from bending over the entire time to complete the task.

Note to self: Buy electric shears before September shearing and have Steven build an elevated stand to hold the goat.

I’m not sure who was more relieved when the job was over.  My friends joke that it’s dangerous to visit the campground because there’s always a surprise waiting somewhere around the corner…this time it was a bit of shearing 😉  But don’t let that scare you from dropping in…just don’t offer to help if you don’t mean it sincerely!

Is orange my color?

Anyway,  Sir Neeshee (Queen Lollipop’s goat protector and companion) thought she looked mighty desirable by the time we were finished…did I mention that it’s Spring…and the birds and the bees?  What a pain!  Lolli’s been in a bad mood ever since…

Neeshee will be next on the trimming deck as soon as we have another nice day and maybe that will calm him down a bit.

…and then Queen Lollipop needed a sweater to protect her from the cold evenings and snow showers.

…With the goat sheared and general agreement that Neeshee would need to wait another day, Su decided to walk the beach and search for sea glass while I planted some perennials that we had wintered over behind the house under mountains of oak leaves and pine needles.

Once the plants were in the ground I mulched them with the scraps of Lollie’s wool that weren’t long enough to spin and too dirty for felting.   I’ve learned that the wool does a marvelous job of both protecting the tender new leaves from these wildly varying Spring temperatures and nourishing the roots with trace minerals as the plant becomes established…the wool also keeps the goats from eating the new leaves if I’m not paying enough attention when we walk past a garden.

The Strand in Rockland

…and then Steven and I enjoyed an early Easter treat…we drove to Rockland for a bit of time in the Second Read Bookshop followed by a Habib Koite concert  at the Strand Theater.   The five piece band played to a full house and there was a wine bar in the balcony so we could sway to the music while we sipped Pinot Noir…

I’m missing everyone from @fibercollege already!!!!!!
#lovetocook
Have you noticed that when you use plants that live in your backyard for printing and dyeing, they match perfectly with dinner?
Have you had drinks @stocktonharboryc yet?
Put a frame around it and suddenly it’s more interesting 😂
I’m enchanted by the magic of eco printing! These experiments will be part of the @fibercollege retreats in September

E-mail us anytime at: relax@campocean.com
Join 5,374 other followers