Oh what a beautiful day! The very nicest part of living in a climate that has four seasons is knowing that soon the season we’re enjoying will shift to something different. With that in mind, the last snow storms of the season are particularly beautiful. This one was only scheduled to give us 4-6 inches on the coast but by the time the snow tapered to nothing, we had more than a foot of heavy, snowman snow to keep things looking pristine and magnificent for yet another week.

This morning when the snow had just begun to fly, I had the brilliant idea (after a strong cup of coffee) that we should go to Belfast for breakfast, to see Steven’s new Garden Project display at the Coop and check on the baby rabbits in the school’s green house (and to pick up a set of new knitting needles, but shhhhhhhh). Thank goodness that Clifford (our big red truck) sports 4 wheel drive because otherwise we’d never have left the driveway. 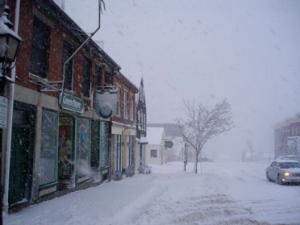 Belfast was a snowy wonderland that was only populated by hardy souls who enjoy wearing Bean boots and woolen caps and great scarves. We had fresh baked bagels, eggs from a farm in Northport and homefries while we talked about the terrific lino-prints Steve’s kid’s did for this year’s seed packets. Of course, Steven knew almost everyone who walked through the coop doors so we played alot of catch up with folks we haven’t seen in ages.

By the time we got back to the campground, the snow was deep enough to merit some shoveling but I left Steven to take care of that while I made a quick chocolate cake…some rituals should never be ignored…chocolate cake to celebrate a peaceful snowfall is one of them.

Good morning!
A day of gardening, dinners in the crockpot and there’s time for a 4 o’clock weaving break…it’s a very good day 😌☺️🐌🪲🧚🏽‍♀️
10 days ago we were in NYC for a swirl of Urban energy…so much fun to go, such a relief to come home!
In April flowers are more precious!
No filter needed…just blue skies and high winds…kite flying weather
Spring peepers are lulling us to sleep and dandelions will star in tonight’s dinner #lovespring #eatlocal